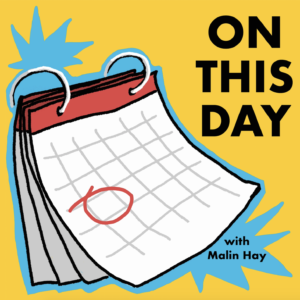 Host Malin Hay, with a rotating cast of guests, discusses the notable, weird and forgotten things that happened on this date in history. Expect deep dives into film, television and history, wacky chart-toppers, and lots of digressions into Malin’s funny-boring life in Cambridge, England. You’ll never need to Google ‘dinner party anecdotes’ again.

Episode 1: 12 May, or, The Iran Cockroach Cartoon Controversy

Episode 2: 19 May, or, The Franklin Expedition

Episode 3: 26 May, or, The Battle of the Overpass (You Gotta Go Down and Join the Union)

Episode 4: 2 June, or, A History of Violence

Episode 5: 9 June, or, A Musical Interlude